ADAPTRONICA is a small company performing research & development activities in the field of intelligent technologies, which can be applied in many areas of engineering e.g. in the space and aviation sectors. The company also offers consultancy services and products, related to the R&D activities. 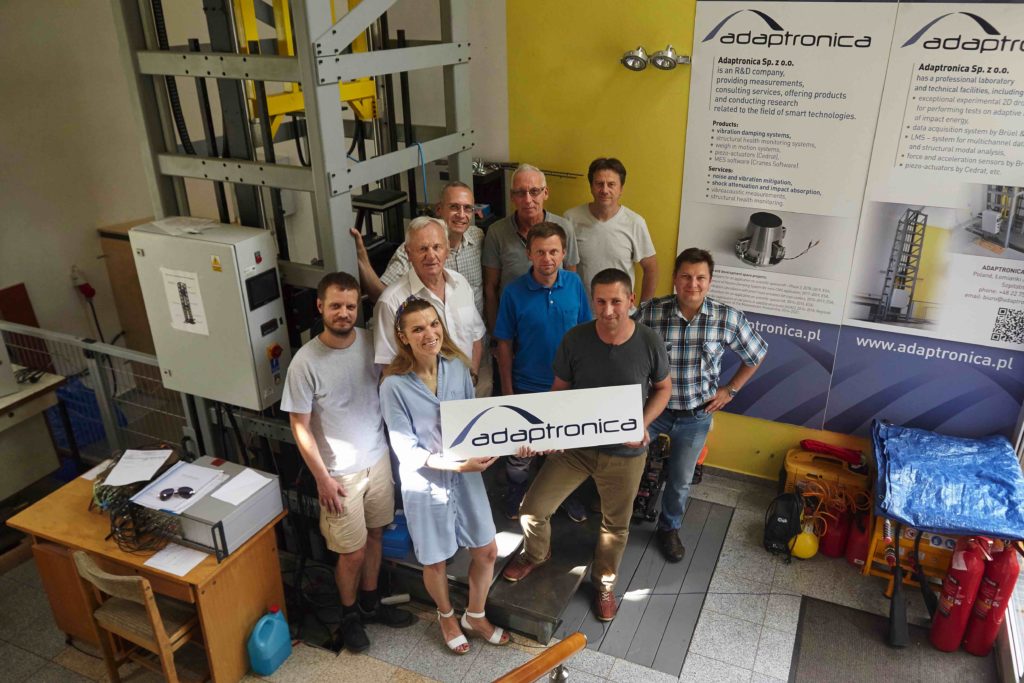 We are a small spin-out company with the roots in the Institute of Fundamental Technological Research PAS in Warsaw. The majority of staff are highly-qualified engineers, strongly motivated to implement innovative technological solutions in various areas of engineering. The team includes a few experts with PhD in technical sciences.

Intelligent technologies encompass interdisciplinary technological solutions, combining elements of mechanics, electronics and vibroacoustics. The solutions are based on intelligent materials e.g. piezoelectric materials in terms of hardware and on up-to-date or in-house-developed analyzing & control algorithms in terms of software.

Applications of intelligent technologies allow for improvement of the reliability of engineering structures (e.g. airplanes, vehicles, bridges) during their lifetime on the one hand and for preserving their integrity in extreme situations on the other. This goes in line with the requirements of safety engineering.

Adaptronica is the leader of the consortium, which carries out a national research project within the framework of the Operational Program Intelligent Development, Sectorial R&D Programs, INNOSBZ, managed by the National Center for Research and Development. Project title: “ADBAG – Adaptive airbags for emergency landing of unmanned aerial vehicles”, POIR.01.02.00-00-0083/16.

The adaptability of the system to be developed consists in adapting the airbag mode to the anticipated kinetic energy of the drone right before the impact with an object. Thanks to this feature, the system provides smooth landing for falls from different heights.

The adaptive airbag system, developed for the drone, can be rescaled for use in other aircraft of larger mass e.g. in the ULL-class ultralight aircraft.

Flight test of the Adbag system:

Adaptronica is the leader of the consortium, which carries out a national research project within the framework of the Operational Program Intelligent Development, Sectorial R&D Programs, INNOLOT, managed by the National Center for Research and Development. Project title: “COMPRESS – Light composite aero-structures based on new manufacturing techniques including prestress”, POIR.01.02.00-00-0027/15.

The aim of the COMPRESS project is to study the non-autoclave methods of producing composite structures that improve the quality of the components of the ULL-class ultralight aircrafts. In addition, the research includes the structural health monitoring issues during operation, thanks to deformation sensors integrated with or attached to the structure.

The developed methods of composite manufacturing can also be used for other structural elements, not only in the aerospace industry.

MODO – a unit for measurement and assessment of dynamic response of operated railway bridge structures. National research project within the framework of the Applied Research Program, managed by the National Center for Research and Development PBS3/B9/36/2015

Innovative system for detecting leaks and optimal control in water networks, based on remotely transmitted measurement data. National research project within the framework of the Applied Research Program, managed by the National Center for Research and Development PBS1/B9/15/2012.

The ADAC project aims at development of a solution to stabilize the vibrations of satellite and spacecraft structures, both orbiters and landers. The ADAC solution is based on the PAR (Prestress-Accumulation/Release) concept of damping of vibrations induced by an impact on skeletal structures. It takes advantage of an innovative adaptive clutch, which allows for quick switching from the frame to truss mode of node operation.

With ADAC, the satellite structure and the optical or measuring devices installed on it, will have a longer lifespan and more accuracy. The most important result of the project will be the implementation of the ADAC system. Adaptronica plans to enter the chain of suppliers of the space industry large integrators, extend international activities and increase the competitiveness of the Polish space sector.

The proposed ADAC solution is primarily a response to the needs of the space industry. However, it can also find other terrestrial applications such as image stabilization, vibration damping of industrial machines or equipment in bioengineering.

We offer services in vibroacoustics, that is noise and vibration inspections, as well as in structural health monitoring.

We offer products resulting from our R&D activities for applications in mechanical, aerospace and railway engineering.

We possess a professionally equipped laboratory with special test stands for vibroacoustics and shock resilience.

We look forward to cooperation